More than four million people were uprooted during the civil war in South Sudan that began in 2013, many of them fleeing to bordering countries. An estimated two million of the South Sudanese who were forced from their villages and cities remain inside the borders of their country without permanent shelters.

As civil war engulfed the country and violence spread in every direction, millions of people moved throughout South Sudan, often numerous times. These displaced people continue to subsist in informal settlements scattered throughout the country. People living in these settlements are hungry and suffering from acute malnutrition. The settlements are rife with disease and lack adequate health and sanitation infrastructure. With no land to cultivate small crops, these internally displaced south Sudanese rely on supplemental food aid from humanitarian organizations like World Children’s Fund to help them survive. 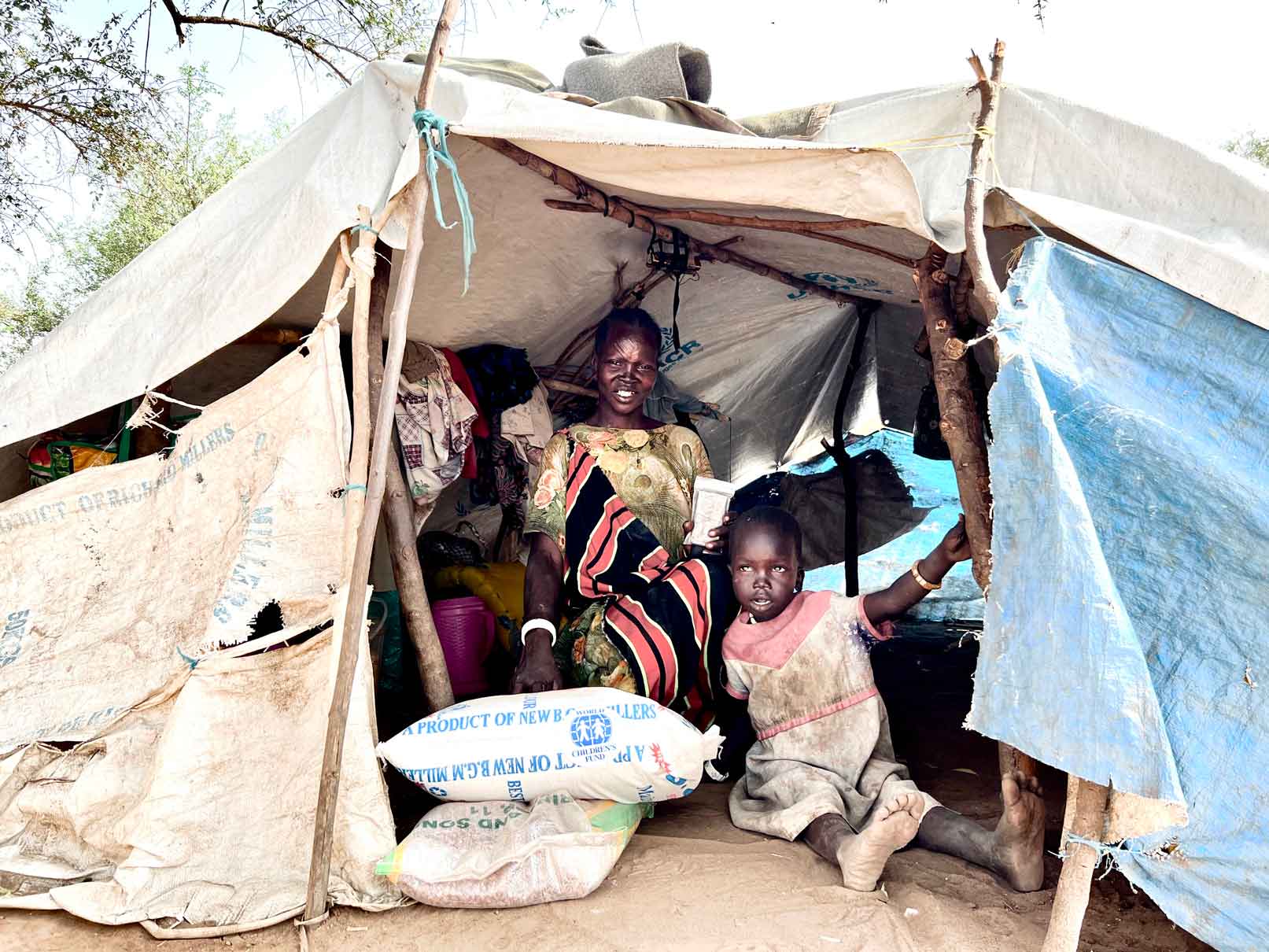 At one settlement, a twenty-minute drive from the city center of Juba, the capital city of South Sudan, the WCF team distributes staple items. The WCF Team works with the elders and family heads to distribute bags of maize flour and beans among the community. The settlement is filled with elderly grandparents and mothers desperately trying to feed all the children in their care.

“Life is hard here in this settlement. Receiving the food gives me hope because we don’t easily get meals like this.”

THABO MARIA, a young mother living in a settlement

One mother and her four children live in a tent she constructed herself with sticks and plastic. She says she first ran from their village and then walked for two days toward Juba. She journeyed with three of her children in tow, while pregnant with the fourth, and gave birth here shortly after her arrival. Her husband stayed behind to fight. She says it is impossible find food and is grateful for the assistance from WCF. When the food supplies run out, she and the others in the settlement eat the leaves from the trees.

A group of women sit nearby in a circle and sort through a large heap of ordinary green leaves from wild trees that grow in the area. They cook the leaves over an open fire on the ground in a pot filled with water. They say it tastes very bitter and often causes diarrhea and other stomach ailments, but they often have no other food source. According to a local south Sudanese liaison who works with the WCF team, “the wild leaves have limited if any nutritional value and can hardly be considered food.”

Another young mother, Thabo Maria, has several children and says, “Life is hard here in this settlement. Receiving the food gives me hope because we don’t easily get meals like this.”

The women talk of the challenges of daily life in the settlement including the disease that spreads easily in their dense encampment. Basic hygiene, running water and sewage systems are non-existent. A few pit-latrines have been dug but are not sufficient to keep human waste separated from the living quarters.

The impacts from the poor hygiene and the meager living conditions are visible. Insects cling and buzz incessantly around the children’s eyes and faces. “Flies are everywhere. I see quite a few children that appear to have trachoma,” says J. Claassen, who works with WCF to implement humanitarian aid programs in South Sudan.

WCF coordinates with other non-governmental organizations to provide medications from WCF pharmaceutical aid shipments. Medications sent by WCF are disbursed to clinics throughout South Sudan. Pharmaceuticals are also disbursed free of charge to people living in the IDP settlements in the Central Equatoria State, which includes Juba. Rotating medical outreaches serve these needy communities and provide much needed aid and care.

“Our greatest challenge now is the daily hunger and the vulnerable, the orphans, who have lost their parents because of the war.”

At another IDP settlement not far from Juba, The WCF team distributes specially formulated boxes of rice meals packed with nutrients that only require water to prepare. WCF dispatches 40-foot cargo containers into the port of South Sudan. The shipments contain up to 250,000 meals. One recipient of the rice meals, a sixty-three-year-old woman is surrounded by thirteen children. Some of the toddlers are her grandchildren, and a few of the older children are nieces and nephews. Others are orphans who are not related to her. “I am caring for the remains of my family, and I feel mercy for these children who have lost their parents to the violence. I am doing what little I can,” she says. During the war, she was forced to move many times. She believes her husband is dead. “We are all suffering from hunger and are grateful for these provisions.” She points to the temporary shacks in the settlement and laments the living conditions. “There are no toilets, clean water or schools for any of these children,” she says.

Another woman receives food provisions from the WCF team and gives thanks. She says she has not eaten for several days and that she and her children are suffering and weak from hunger. 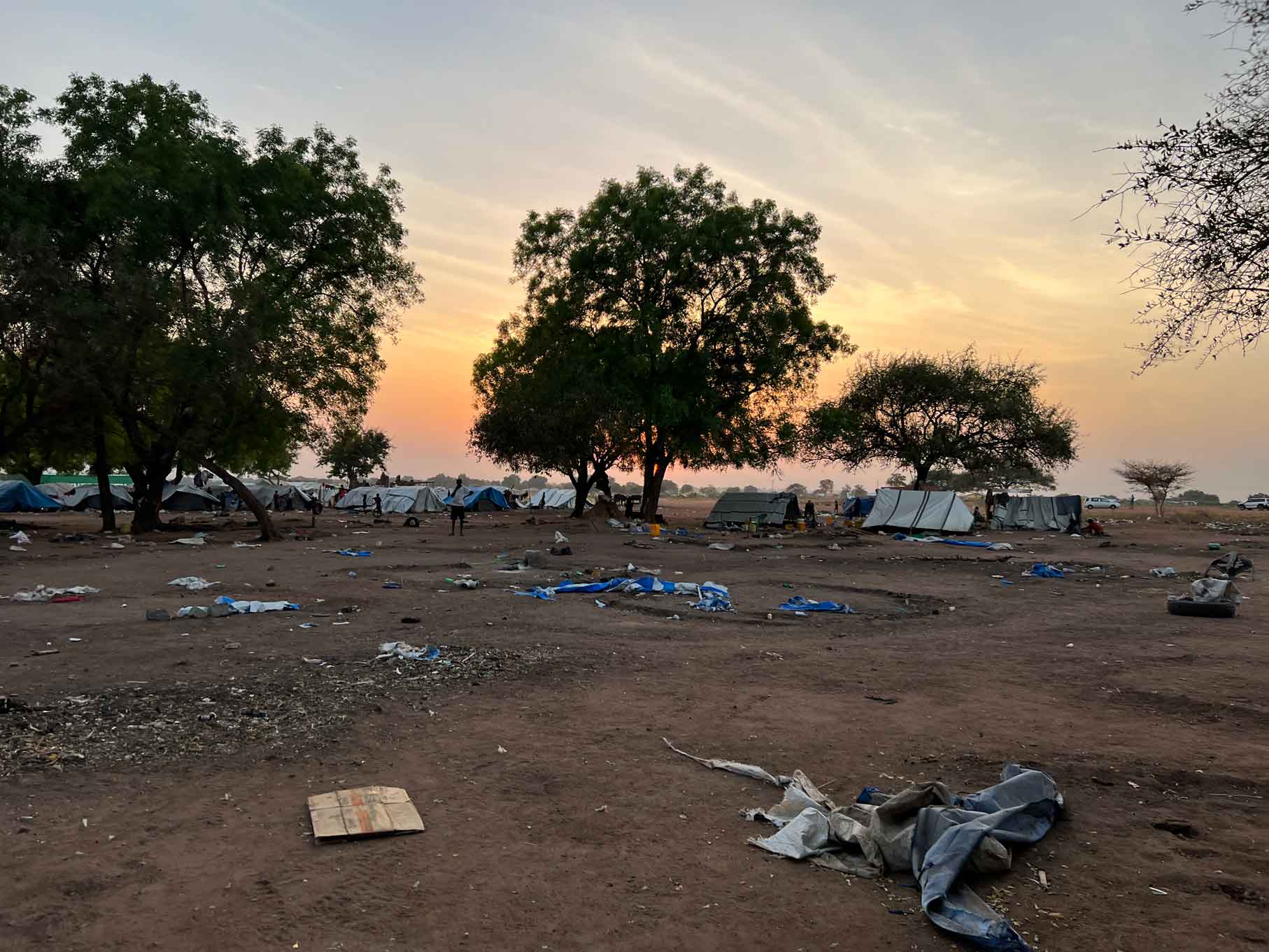 Six children hang on the skirts of the next woman who gratefully receives her food aid. She says she travelled to Juba in 2014 along with her sister after their husbands were killed when their village was attacked. Her sister recently died from an unknown sickness and as the sole survivor, she is responsible for all six of their combined children. “We don’t have enough food. There is no place to plant,” say says. She would like to try to return to her former village, but she lacks money to travel, is afraid of being attacked or ambushed on return, and the region where is from is now plagued with flooding.

Although the civil war is “over” and the warring parties have signed agreements, nearly everyone agrees peace has not yet arrived in South Sudan. “We are a fragile nation,” says Chief Paul, the elected village leader of one of the IDP encampments on the outskirts of Juba. “Our greatest challenge now is the daily hunger and the vulnerable, the orphans, who have lost their parents because of the war,” Chief Paul says. “I hope one day we can leave these settlements and live in safety on land we can call our own.”